While waiting for my project’s Printed Circuit Boards to arrive, I decided I should try shooting some more time lapses.  I won’t be able to design the iPhone software until I get some more experience.  I wanted to figure out some sort of time lapse that wasn’t crazy long.  That way I wouldn’t have to worry as much about ambient light changes, and I could try out different things quickly. I picked up a pack of birthday candles at the super market.  How long does it take one of those puppies to burn down?

I timed one, and it came in around 15 minutes.  Perfect.  Now all I needed was a better background.  As nice as peg board and cobwebs are, they weren’t the best back drop for my first time lapse, so this time I went that extra mile. I put a rusty steel plate behind the scene, but I still had to cover the base of a lamp. I decided to use a lovely wooden cutting board that my uncle had made for us. Alright, the stage is set. I completed my first candle time lapse.  That one went ok.  I was pleased by how the spirals on the candle sides make them look a bit like the tops are spinning down. 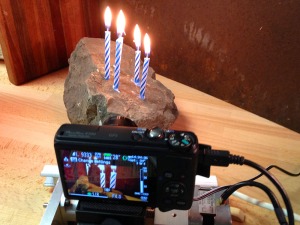 The one downside to shooting time lapses involving fire is that you must have a fire extinguisher handy and keep an eye on them the whole time.  None of this “set it off and go to bed” crystal growing luxury. One mistake I made was that I lit the candle with a match and accidentally clonked the candle while I was doing it.  For my next shot, I wanted to set up a bunch of candles and light them incrementally.  I rushed to the corner store and bought one of those butane BBQ lighters.  Now I was ready.  My first shot had been a bit short because the candle didn’t burn all the way down before the preprogrammed time lapse ended.  I guess my 15 minute test included a little bit of me blowing on the candle, which really shortens the burning time because it melts extra wax.  Also, this time I was going to be lighting them incrementally.  Best not to have it run too short, so I switched to a 28-minute duration.  I used the stopwatch on my phone so I could light the candles in 30-second increments.

I really like the idea of performance time lapse.  It’s kind of fun dodging in and out of scene between camera shots.  After 28 minutes of watching the candles burn, I rushed inside to squeeze all those stills into a movie.  OH NO!  This time there were no frames on the SD card. I’d wasted the entire shoot. What happened?  I still don’t really know. I’m using CHDK so my camera now has about 8 zillion tiny menu options, and eventually I just reset everything and re-enabled the USB remote feature.  Then it worked again.  It was so weird because during the entire shoot it was acting as if it were taking pictures.  Now I know to really watch the “remaining frames” number and make sure it’s actually going down.

I did two more shots: a green one and a red one.   For the last shot, I  propped the camera rig up with some clothes pins on top of an empty cardboard box so I could have a shot looking down on the candles.

I sat with the camera until all the candles were out, and then I left.  When I came back, I found that the camera had flopped forward and done a face plant on the rocks!  In a panic, I tested the camera, but it seemed to be working.  While looking at the time lapse frames, I noticed that at the frame where everything went wrong the words “Mystical Garden” were eerily smeared across the rock.  Was the ghost of my previous time lapse jealously haunting the set?  No, but almost as miraculously, the camera shutter had been open during the exact moment of  collapse and had taken a smeary photo of the nearby box my crystal growing set had come in!

I hear by swear off the Cardboard Box and Clothes Pin Mounting System.  Time to build a tripod mount and lay this Mystical Garden to rest. You can see all the candle time lapses here.