PhotoJoJo sent me an ad for a small camera slide.  It was kind of a lot of money, and wasn’t even motorized.   I’ve been taking videos of projects and thought that a little motorized camera slide might be a nice way to spice up those kinds of videos.  I  remembered we still had a dead inkjet printer left over from the kids’ “Take  Stuff Apart Day” that we’d done a few months ago.  Inkjets have a linear motion slide inside.  I thought, “Wouldn’t it be cool if you could make a camera slide with basically just the parts from a printer?” 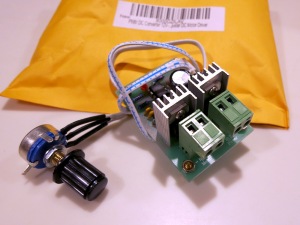 I didn’t want to have complex control software, and I wanted it to be mostly made from the printer. In the end, I spent about 4 evenings hacking up something.   There are lots of cheap motor controllers out there, so I squashed my initial instinct to hack up a speed controller out of bits from my junk drawer.  I instead decided to act like an adult and order one of these.   With free amazon prime shipping I could have it in two days for under $10.  I’d probably end up spending more on perfboard and components building a  home-brew driver. Plus, if this project was  a bust, there would be plenty of other uses for the driver board since it could drive a much bigger motor than the one in the printer.

I scrounged up some micro-switches and a wall wart to power the rig.  I also ended up buying a switch and a project box from RadioShack.  So the total bill for this project was about $20.  I even (mostly) used wire that was taken from the printer.  I really wanted this project to be simple to do in the hopes that other folks could build one.   The interface was fun to design because it’s entirely electro-mechanical except for the speed controller.

It was fun to design an interface that didn’t have any software but was still nice to use.  I had a direction switch that you could push in the direction you wanted the slide to move, a launch button that would start the stage moving, and two end-of-travel microswitches.  It was fairly complex behavior from a minimal amount of wiring. I was really satisfied with how that turned out. 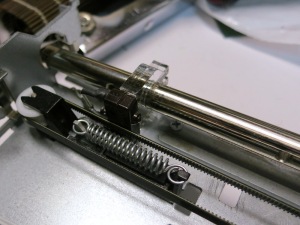 I laser-cut some mounts for the end-of-travel switches so they could be mounted right on the rod that the carriage travels along.  The mounts allow the switches to slide along the rod to position where the camera motion should stop.

Probably the single most time-consuming thing was hacking down the carriage.  I used a cutting disc on my mototool to hack the carriage down to a roughly flat area and then used some Bondo/black spray paint to make it look like a nice, flat surface.  I also stuck a short 1/4-20 screw up though the center to mount the camera on.

I was planning on mounting my Cannon S100 to the slide.  It’s light, so the whole rig didn’t have to be super strong.  Luckily, I happened to have a ball-and-socket camera mount sitting around from an old project, so I hooked that up to the screw on the carriage. 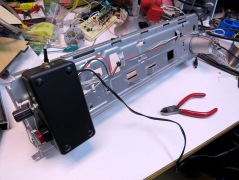 At this point I realized that for a camera slide this small, most of the usable camera motion is VERY slow motion, and the printer’s motor was just not up to the task when running open loop.  If I salvaged the position encoder and hooked up an Arduino as a controller, I probably could have managed to get very nice motion of of the rig, but since the goal was a one-evening super easy/cheap hack, it was a fail.  Putting a gear-head motor in there would also have worked, but also violated the cheap and easy premise of the build.  Here’s a video of the final result.

I wouldn’t be surprised if there’s another camera slider project in my future.  This time with more motors and software.   This was a great learning experience, and as the Lego Guy said, it’s time to “Keep Tinkering!”

A long time ago, I got a Harbor Freight drill driver that was on sale for less then twenty bucks. I knew not to expect too much from the drill, but I thought that a motor,motor-controller, gear box, battery, and battery charger was a pretty awesome bunch of stuff for that price. The drill didn’t see much use.  At one point I took it to work and fashioned a spiraling hypo disc for it from office  supplies.  So I guess it did help me with some technical discussions at work, but for years the drill sat idle. A few months ago, my son wanted me to build a Van De Graaff generator. I was originally going to go with an AC motor, but my boxes of motors had very few fast AC motors. Lots of stepper/servo motors, lots of DC motors, and AC motors with gear heads, but basically no high speed AC motors. I read an Instructable about Van De Graaff generators that said you should be careful not to have sensitive electronics plugged into the same line as the generator! I don’t really know if that’s true. But if I went cordless, Pioneer might be able to take the generator to school, and we wouldn’t have to worry about randomly killing electronics around the house. I remembered that old drill, fished it out, and charged up the battery.  Much to my surprise, it was still functional.

I knew I’d have to ditch the gear head in order to get more speed, so I ripped the thing apart. I took off the gear head, and the motor seemed to still have plenty of power, which was encouraging. I opened up the trigger assembly to see what was going on inside. I popped the case open, and  every wire immediately fell out. I happened to be holding the wires in order, so I groped around one-handed to get out my camera to document the wire order. Thankfully, I later found that I’d already taken enough photos to document the wiring, but it was an exciting moment. The controller uses a cleaver set of pinch connectors that release the wires as soon as the case opens. Fortunately, the trigger assembly actually has decent labels for all the connections.

I didn’t dissect the circuit that extensively, but there’s a very nice IRFZ44N N channel VMOS transistor that does all the switching, and it even has it’s own internal protection diodes, which means the circuit is really simple. The trigger switch is actually quite complex and cool. It does different tasks depending on its position. When the trigger is fully out, the switch shorts out the motor for quick stopping. When the trigger is pulled in all the way, the switch bypasses the  power transistor so it’s not doing any work. When the switch is in the middle range, the trigger is controlling the wiper for a linear potentiometer that’s controlling the speed of the motor. There’s a little 8-pin chip that is taking that pot’s voltage and producing a pulse-width modulated signal that’s driving the gate of the power transistor. 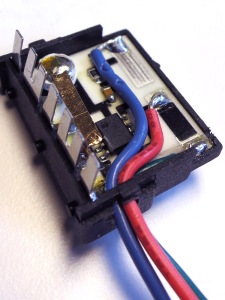 In an old Bosch drill that I fixed, the PWM was being provided by an actual 555. This little 8-pin chip was not labeled, but I kind of doubt a  555 can drive the kind of gate capacitance that Mosfet has. So who knows, but it doesn’t matter for this project. I thought, “Oh, I can force the switch into that middle range, then wire up an external pot for a nice knob-speed control” I cut the on-board potentiometer with a Dremel cutting disc and soldered leads to the three points of interest. Then I drilled a hole out the side for the wires to exit.  I also had to take my grinder and do incredible violence to the sliding-switch assembly that had been holding the wiper to make room for my big soldered wires. The switch was never going to work the way it used to.  I just had to hope it was going to work at all.

I started reassembling, and I realized that one of the tiny clips from that cleaver wire-clipping mechanism was missing! I spent 10 minutes hunting around on my cluttered work tables and grimy shop floor to no avail. I had just given up when (as I was walking out of the garage) I stepped and heard a funny scrape.  There, under my shoe, was the missing clip! *phew*

The project was saved! Be careful not to lose those little guys. I re-assembled the trigger assembly without the trigger. The original internal pot was about 700k, so I plumbed in a 1Meg pot and decided to give it a try. It worked! At the low end, the motor would whine and not turn, but I knew I could wire in a fixed resistor so we could set the min PWM duty cycle that would make the motor and belt turn.  The knob would be the perfect speed control. Now the only problem was that I no longer had an on/off switch. I really wanted a switch integrated into the pot, but when I went to the surplus store all the pots with integrated switches where log-tapered pots. 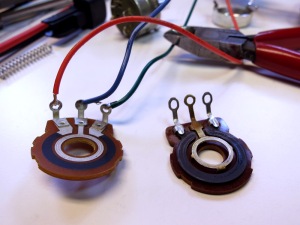 I assume that’s because most people use an integrated switch when they want ‘off-on volume’ style controls and our perception of audio volume is logarithmic.  What to do? I didn’t  want to have to special order some pot just for this hack. So I decided to build a Franken-Pot (TM). I bought a pot with a switch, pried it open, and swapped resistive elements with a different 1meg linear pot. The surplus pot was clearly of much nicer construction then the cruddy RadioShack 1meg pot. The biggest difference was that the center contact ring on the surplus pot was raised up, but I bent its wiper blades out a bit more, and they were able to make contact with the other pot’s center ring just fine. I had to do a little bit of filing and grinding to make the bits fit snugly, but once I had the tabs bent back down, no one would be able to tell it wasn’t just a stock pot. 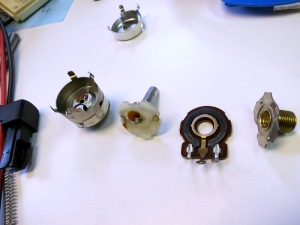 (Full disclosure: mostly, I just wanted to be able to say stock pot.)

So that was a bit of a side adventure. I wired in the fixed resistor to set the minimum PWM and wired in some connectors so the pot could be unclipped when you opened the base of the generator.  Then it HIT ME. The big mistake. I had one of those “What was I thinking?” moments. This thing was going in the base of a machine that was going to be shooting 100kv sparks around. That electronic speed control was never going to survive in there. I was going to have to go back to a simple on/off switch and this whole motor control adventure had been a kind-of-fun two afternoon waste of time! *smack forehead*