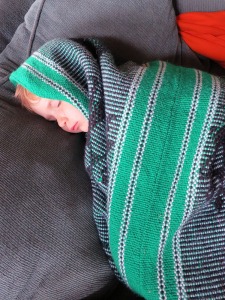 Simon had a high fever for several days. We got him to take liquid Tylenol exactly twice: he took the cherry flavor once and the grape flavor once. After that, he declared they both tasted like toothpaste, and even though they helped him feel better, he was not interested. When we took him to the doctor, it turned out he had an ear infection, so Simon was prescribed a 10-day course of antibiotics to heal what was ailing him. Simon did not like to take the medicine.  He was groggy, feeling miserable, and having none of it.  For one dose, we  had to force him to take it.  It was a parenting fail.

When I was growing up, my parents would make count down boards so we could count the days until we went on a trip. They would have a row for each day and two columns of treats, one for me and one for my sister. It was a bit like an advent calendar, but it helped us watch the days until we drove off to Florida or some other destination.

I thought maybe I could do a similar thing for Simon. He would have a treat after each dose of his meds, and it would visually represent the number of doses left so there would be an end in sight. I thought that might become pretty important as he started to feel better and was even less excited about swallowing a big pink spoonful of yuckiness.

In the interests of time, I didn’t design this thing to be laser cut. I needed one NOW! I sketched the design onto a piece of plywood and cut it out freehand on the bandsaw. Then I slathered the whole thing with Gesso, a kind of primer for doing acrylic painting. Normally I would have done a couple of coats and sanded it smooth, but I didn’t have time for that and I figured the rough Gesso brush strokes might add something to the look. The next morning it was dry and I sanded it lightly being careful not to sand through. 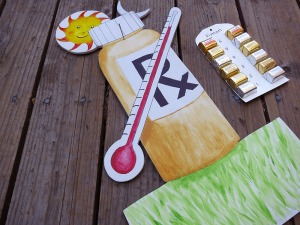 Then I got out my brushes, painted the design with acrylic artist’s paint, and did the outlining with a sharpie since my tube of black paint was AWOL. I used the black to paint the faces on my pastry cutters, so it’s probably still in that project’s box.

The design has a sun and a moon for the morning/evening dose columns. I have built some boards where I just hot-glued the treats right to the board, but  I decided instead to glue them to a card that would hang on the board. That way the next time one of the kids needs to take meds, I can just make a new card.

I had some trouble with the sun’s rays. I had them coming too far into the face area.  I had to let it dry and repaint that part a bit. Haste makes waste. Simon liked the board, and was good about taking the meds once he was “on the board”. It’s hard to tell how much of that was “Simon getting used to the medicine” versus “Simon is encouraged by the count down board.” I’m going to guess it was about 60/40.
I do think it really helped with the later doses since he always knew they were coming and how many there were left.

I’m glad we have the board. The next time one of the kids needs to take some medicine, it will be waiting to lend a hand. 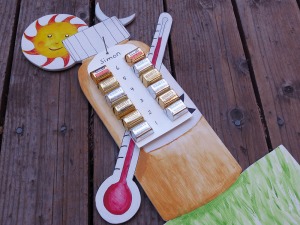