I like making Halloween costumes.  When I was little my mother did a lot of sewing, quilting, embroidery, knitting, crochet, tatting, etc.  She showed me how to do the basics.  How to sew on a button, and encouraged me as I worked on various projects.  A square of cathedral window quilt, a lion embroidered a lion on my lucky sock, a counted cross stitch bear.  I can remember arriving at a friends house, only to realize that the embroidery hoop was unexpected affixed to my knee.  I’d stitched through my pant leg during the drive.

So I knew the basics, but had never gone very far with it. Then for many years I didn’t do much more then hem a few pairs of pants.   Then my son Pioneer was born, and when Halloween rolled around I realized that I was interested in making him a costume.

I had seen a cute baby dressed as a pumpkin, and though “I can do that.”

I discover I have a super power

Well, I wasn’t exactly bitten by a radio active spider, but I did spend many hours sifting through the mixed buttons bin at “Finche’s Fabric Farm” while my mother shopped.  I’d spent untold hours in the sewing room listening to the whir of the sewing machine, playing with the snap pliers, pinking sheers, tracing wheels. I remember the smell of the sewing machine oil in its little can.

As I started in on Pioneer’s pumpkin costume I discovered that all those hours in my childhood had instilled in me a mysterious power.  I was totally at ease at the fabric store buying materials for the costume.  I knew exactly what to do, just by going with what felt “right”.   I made paper templates.  I folded them in half before cutting to make the symmetrical.  I cut test pieces, left seam allowances, added piping.  I knew how to lay things out, pin them up, sew them, turn them inside out and stuff them with fiber fill.   It all felt totally comfortable.  Like I’d done it a thousand times, even though I’d never actually done it at all.  It felt like coming home.

Best of all, the results were actually pretty good.  Now it may seem like silliness to spend 7 hours making a costume that Pioneer only ever wore for 5 minuets (seven month olds aren’t big on wearing hot heavy outfits with hats for very long) but once you’ve discovered a mysterious power, who wouldn’t want to try it out?   To give it free reign and see where it takes you.

Halloween costumes have a lot to recommend them.  They’re 85% aesthetic.  If they look good, they are good.  They only need to be sturdy enough to survive a few hours of trick-or-treating.    They have a fixed deadline, and a short schedule, and a very short lifespan. These are ideal conditions for getting in touch with ones inner seamstress.  If I’m not sketching, cutting, pinning or sewing every minute. I’m not going to finish, so I don’t have time to second guess.  It turns out to be ridiculously fun.

I try making an owl costume.

For his second Halloween I had Pioneer choose what he wanted to be.  He chose an owl.  He likes owls.  He points to them in our bird book, makes hoot  hoot sounds with me when we see them in his “Animals Showing Off” pop-up book. We’ve stood together on the deck, under the stars, listening to their deep calls. Yup.  He wanted to be an owl.  It wasn’t until I did some web searching that I discovered how difficult a task k this was.  These human owl hybrids are tricky, and every owl costume I saw on the web looked either sad or ridiculous.  I had my work cut out for me.

One thing my research into owl iconography made clear was that if you’ve failed to get people to recognize your owl you slap an mortar board on top.  Owls are very striking birds. I was hoping I could get the owl idea across without resorting to whacking people with a board.

The pumpkin had been all about fleece, but in my book owls are corduroy.  Something about the the texture and softness.  So I went off to the fabric store and bought three kinds of corduroy.  I also started making some sketches and paper mock ups of what the owl might look like.  I got in the zone,  and cranked out the owl costume in one weekend (plus two weekday evenings.)   I knew I was going crazy when I considered making a lining for the costume.  I had to remind myself that I’d be lucky if he’d wear it for more then 5 mins.

Lessons learned from the corduroy owl:

Never mark white corduroy with a sharpie unless you’re ok with both sides being black.  Doing lots of sewing in a shop littered with sawdust and metal shavings involves the fine art of never dropping anything, and perhaps most importantly when you’re son pulls out some polyester fiber fill and puts it under his chin and says “beard…  beard!”   it’s so cute that it is very nearly fatal.

I had done a nice mock up in paper of what I wanted to do.  However when it came time to make that vision a reality it turned out that toddler heads are pretty darn big, and in order to make the owls eyes/face the way I’d originally intended I’d have had to make the head HUGE.  I think this a problem many of the web owl costumes were suffering from.  A too small head perched on top of the kids face.  Weird and distracting. I don’t think Pioneer would have dealt with a full owl mask because that’s just too much face coverage.  Besides his face is super cute, so putting something over it, or right above it seemed like a tragic waste of cuteness.  So I opted for a more stylized treatment of the head.  Just a kind of owl horns hood stiffened with sheet plastic and welding wire on the inside.  As it turns out he actually likes wearing that part of the costume.  He didn’t want to take it off.

So on Halloween he wore the main part of the costume pretty much all day.  It looked great.  He came to work during lunch time, and then we went out trick-or-treating with his baby group pals at night.  We couldn’t quite get him to say “track-or-treat” but he kept saying “candies” and motoring on to the next house.  He did freak out a little at one house when a motorized disembodied hand started crawling across the porch towards him, but we distracted him with a kitty that was right there, and he seems to have not been to scared by the experience.  He loved all the lights and decorations.  We went to quite a few houses, and then our friends/neighbors Carl and Rita invited us in and gave us dinner, and he got to see some old school stop motion dinosaurs in “The Lost World.”

All in all it was a very successful Halloween.  I’m hoping next year he’ll be willing to try some things on before the big day.  After I’d seen him wear the thing, I realized there are some alterations I’d like to do.  The lower back section is pretty square, and could really use a couple of seams to take out some of the extra material and make it more form fitting.  Also the Velcro flap that holds the front closed isn’t sewn all the way to the top, and that made it so it was free to flop out a bit at the top.  I was going to hand sew that section, but didn’t manage to get around to it.

Hey, I even have a picture of Pioneer clearly contemplating how many licks it takes to get to the center of a tootsie pop: 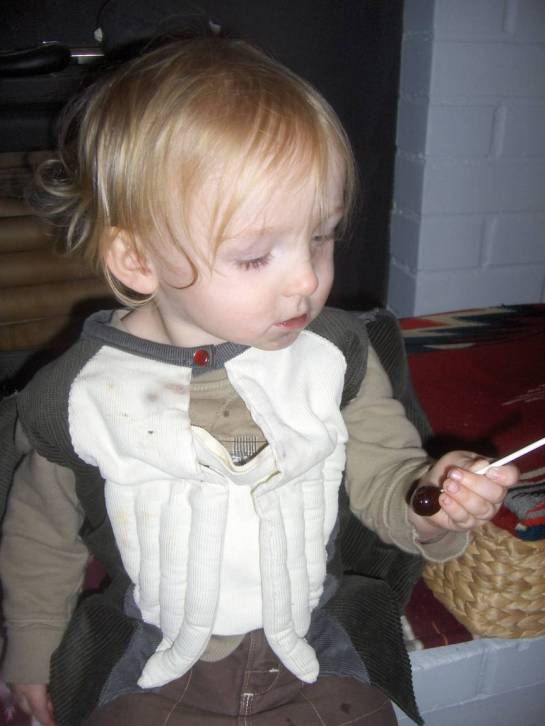 The original web page in the internet archive.